Gold, Copper, Zinc, Silver found on the Road in Arizona

Just returned from gold consulting projects in Wyoming and California. Really enjoyed my time in Wyoming searching for an offset on a gold deposit I had mapped and investigated many years ago. Typical of Wyoming, there are more cows than people with the country side wide open to a non-stop wind. When I got there in early October, one day it was warm - the next I had to dress like an Eskimo. I sometimes forget how much I love geology and Wyoming, and if it wasn't for my wife Sharon kicking me out of the house periodically, I would probably not get out in the hills. I do have a reputation of finding mineral deposits - something I'm proud of - and this ability I feel is the result of my curiosity to see what is on the other side of the hill and  an optimistic attitude when it comes to searching for mineral deposits.﻿﻿﻿

I love doing geological work, but I have a serious problem with bureaucrats. Don't like them and you can't make me like them. Never could find any use for people who are unproductive and live only to cause problems for those who like to work.

Every time I think of politicians - I laugh (or cry). From the President to the city manager: they are all in somebody's pockets and bow to Chinese and Arab investors - makes one wonder if Darwin was right. Personally, I think Darwin had it all wrong. If he were right, how could those who are least productive in society run our government. Something is wrong with this scenario. Isn't it time we required all persons running for office to have had a least one job - other than a pimp, used car salesman, alien (or woman, etc), and should not be allowed to accept a Noble Peace Prize for doing nothing. If you have the time, email the Noble Prize committee and let them know that you thought they were playing a joke on us by giving Gore and Obama a prize for ...  What was it they did?

If automated lie detectors (ALD) were attached to our TV sets to detect lies by politicians, our TVs would fry every time a president made a speech, or the president's press secretary briefed us on another scandal like Benghazi or Fast & Furious. I didn't like Bush and I don't like Obama. When Obama leaves office, he will have a new skill as a professional golfer and will have left our country so far in debt that we may never recover. If any politician ever told the truth, we should declare a national holiday.

While Obama was out golfing, I was talking to a friend (a golfer) who noted that golfing takes an entire day. Wow,  how many working days does 100 equal? If we assume a 5 day work week, Obama spent 5 months of his presidency golfing (and who knows how much more time on vacation). This means, 12% of his presidency has been devoted to golfing while the rest of us are losing savings, homes and being  strangled by obamacare. Think obamacare is good? Well how come every friend of obama has received a waiver along with every congressman or senator. Oh I know, they just want to put us before their needs. So, if obamacare is so good how come nancy pelosi and harry reid are not signing up for this fabulous obamacare? We should all march on Washington and require all of these political scumbags to sign on to obamacare.

Remember Al Gore (or cousin Al as we called him in Laramie) talk about Global Warming, I wished I could have attached that ALD to his ear lobes and watched the TV melt at the Cowboy Bar. Here's a question? What is longer than Nancy Pelosi's nose? That's easy - Harry Reid's nose! Hey, I'm no fan of Bush either, other than I miss all of the Bushisms.
﻿
When politicians talk about dwindling natural resources, the ALD goes into overtime. These people are just silver-tongue used car salesmen  with little intellect and silver tongues. Their brains are in their mouths. None of them have the foggiest idea of what natural resources are, other than a way to tax people, or to give away our resources to foreign agents and governments for money under the table.

Let's look at our natural resources. Not so long ago, we were running out of oil. But as soon as geologists have money in their pockets, plenty of natural resources are found. It's because we have barely touched our natural resources in the US let alone the world. Take a look at oil and gas - we needed some, so geologists went out and found new deposits. We now have enough to keep us occupied for centuries without having to import anything from the Saudis. So why do we still have to  import? Because government leaders (remember those used car salesmen?) are getting rich by kowtowing to the Saudis at our expense.

COPPER MINE on Interstate - 60
How about copper? Well, every time we turn our backs, someone finds another major copper deposit in Arizona. Thought they were all found? No way! Not even close. I liked telling my students that for every deposit found on the surface, there are likely 20 blind deposits hidden at depth from our view. But who knows, this could be 100 or even a 1,000. All we need is the incentive to search for these not so easy to find deposits. Just last year, my wife and I visited the Resolution copper mine on the edge of the town of Superior Arizona. This is a giant copper-molybdenum with by-product gold and silver deposit.
Now get this: the Superior district in Arizona had silver deposits and a town site known as Superior was developed. This town is only 25 to 30 miles east of the Phoenix valley and sits right along I-60. The town first became known for its silver and especially, copper. Copper was found here in 1874. The Silver Queen mine produced some ore, and years later, this mine was renamed the Magma mine as it began to produce large amounts of copper.  But it (and nearby mines) ran out of ore some time ago, and the town started to turn into a ghost town until someone decided to drill a little deeper to see if anyone missed anything of value. How come they didn't try this sooner? Its because most people are pessimistic. Anyway, someone convinced a CEO somewhere to try drilling a little deeper under the historical Copper Queen/Magma mine and low and behold, they found another ore deposit that has a minimum of 1.6 billion tons of copper-molybdenum-silver-gold ore. This mine is so close to I-60, that you can stand near its head frame and hit the interstate with a rock! But it didn't take long. This long abandoned area was soon to be rare and valuable land that needed to be protected to be sure there were no jobs created. It didn't quite work (almost) and now the mine is being developed (as I write) and will result in several hundred jobs that didn't exist before.

Not too long ago, someone found a giant of a giant copper deposit in Bristol Bay, Alaska. It so big, that if it were ever mined, we could provide electric lighting for the entire solar system. But instead, it will likely be made into wilderness now that it's been discovered. Why does our government keep doing this to us?  What are they saving all of these mineral deposits for? Personally, I think we should send all of our politicians on a luxury liner to China or Saudi Arabia, and fill it completed from top to bottom with copper and see how well it will float.

How big is it? Well, its every bit as big as the Bingham mine in Utah (and then some). In 2008, it was estimated (based on limited drilling) that this deposit has 31 million ounces of gold (the great Homestake mine produced only 40 million ounces over a span of a hundred years - and it was just a gold deposit with a little silver). It also has a minimum of 265 million pounds of molybdenum (that stuff that is necessary for making steel) and a minimum of 18.8 billion pounds of copper!  That is 18,800,000,000 pounds. Now this does not include all of the by-product metals (silver, rhenium, palladium, zinc).

OTHER MINES ALONG THE ROAD
We were on our way to visit the United Verde and United Verde Extension Mines in the town of Jerome right adjacent to Highway 89A. This deposit was all mined out and closed in 1953. Or was it? Well, ask anyone - it is all mined out!  Well, not really.

During its heyday, it produced more than 33 million tons of ore from the open pit operation (see below) and more than 81 miles (>427,000 feet) of tunnels and shafts. The ore would be worth more than $14.8 billion at 2012 prices for copper, gold, silver and zinc. And of course, the old miners found everything! Or did they?

During mining prior to 1953, some 'blind' deposits were found at depth. One, was the United Verde Extension mine. A group of miners explored for years looking for hidden treasure. When they were ready to shut down due to bankruptcy, they found a very rich deposit hidden at depth.

So how many more blind deposit are to be found here? My guess would be a few dozen. If you look at Google Earth (search for Jerome, AZ) you will see a 14-mile long gossan along the western edge of town that runs right through the United Verde open pit mine. Gossans are sort of rusty guides to ore deposits. The United Verde miners looked for only the good ore within the mine. In doing so, they decided not to mine any more zinc than necessary (zinc was not worth much in the old days) and thus left behind all of the low grade ore (sitting in place unmined). This low-grade, at today's prices, is likely very valuable (imagine that, a mined out mine with 2 to 3 times as much ore left behind as was mined).  One resource estimate suggests 115 million tons of low-grade massive sulfide ore and 38 million tons of mineralized black schist was left behind that contains economic grades of copper, zinc, gold and silver. This low grade ore was reported to have at least 400,000 ounces of gold. Some suggest that the gold content may be as high as one million ounces! And what lies beneath?

Then there is Bisbee. Highway 80 runs so close to the Lavendar Open Pit mine, if you are not careful, you could actually drive into the old mine.

In an upcoming blog, I will tell you about hundreds of diamond pipes found along the interstate and US highways, giant opal deposits next to highways, gem labradorite found in road bed material and more.
Posted by Sokeshodai at 3:27 PM 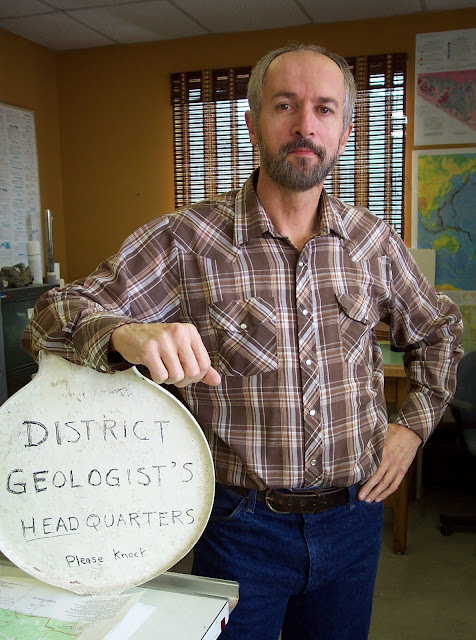